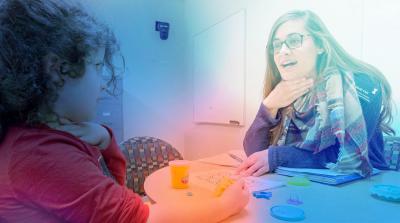 Dr. Anjali Forber-Pratt, who completed BS and MA degrees in the Department of Speech and Hearing Science in 2006 and 2007, received the 2021 Harold Scharper Award from the Division of Disability Resources and Educational Services (DRES) at the University of Illinois Urbana Champaign. Named for the first paraplegic to attend the University of Illinois Urbana-Champaign, the Harold Scharper Award recognizes alumni who have received services from DRES and who have attained outstanding success and national or international distinction in their chosen business, profession, or life’s work.

Dr. Forber-Pratt, who also completed a PhD in human resource development at Illinois, was appointed director of the National Institute on Disability, Independent Living, and Rehabilitation Research (NIDILRR) by President Joseph Biden last May. Prior to her appointment to NIDILRR, she was an assistant professor in Vanderbilt University’s Department of Human and Organizational Development, where she conducted research on identity, equity, and empowerment of marginalized individuals, particularly people with disabilities. She secured more than $700,000 in research funding as a principal investigator, presented regularly at state, national, and international conferences, and authored more than 30 peer-reviewed journal articles and several textbook chapters.

Initially intending to become a speech-language pathologist, Dr. Forber-Pratt fell in love with doing research during her undergraduate and master’s programs. While she did not pursue her original career choice, she says the education she received in speech and hearing science prepared her to be the researcher, scientist, and activist that she is today.

“Those classes taught me how to be a critical thinker, how to read research and ask the right questions, and how to think about who’s not at the table,” she said. “I’m so grateful for those experiences and so honored that I had the opportunity to learn from some of the best qualitative researchers in the world.”

As director of NIDILRR, Dr. Forber-Pratt plans to work on improving the representation of people with disabilities in all aspects of research, from serving as subjects in studies to principal investigators. She received the inaugural Citizen Psychologist Award for Advancing Disability as a Human Rights and Social Justice Issue from the American Psychological Association in 2020. She was recognized by the United Nations Women Global Innovation Coalition for Change as a #SheInnovates honoree in 2019, and helped to inform President Barack Obama on disability policy issues as a 2013 White House Champion of Change.

A former member of the University of Illinois wheelchair track and field team, Dr. Forber-Pratt competed for Team USA at the Paralympic games in 2008 and 2012.

Back to SHS E-News